I went down a rabbit hole in the last month as I started to plan a winter camping trip with the kiddos. I think it started at 4 season tarps, continued to canvas tents, then to hot tenting (people put little wood burning stoves inside a canvas tent – mostly Canadians) and went to too making and this obscure corner of YouTube around “bushcraft”, which I never knew existed. From what I can tell, it’s modern men who fantasize about living like neolithic soloist in the “boreal” forests (it’s got to be boreal… the videos always mention that point).

My cursory analysis is that it’s a backlash against technology and being always connected … and scratches an itch about living in a sod hut in the forest hunting small game… or something. I’m not knocking it – it’s making me want to try my hand at subsistence farming in the boreal forest… somewhere.

Here’s a folding bow saw (for cutting firewood? I guess?). It’s hickory and finished with boiled linseed oil. The pieces fit together with a mortise and tenon on the long arm and the blade folds into a saw kerf in the handle.

I know I’m going to feel like a real frontiersman when I pull it out of my pack on a backpacking trip (I don’t even make campfires when I backpack).

Before I rounded it off and cut the curve on the cross brace: 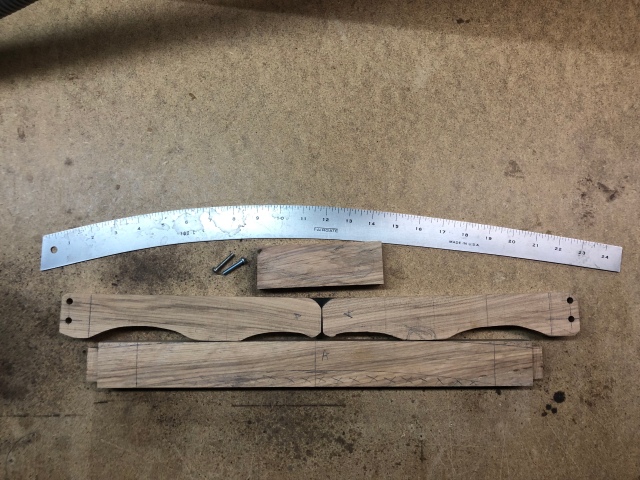 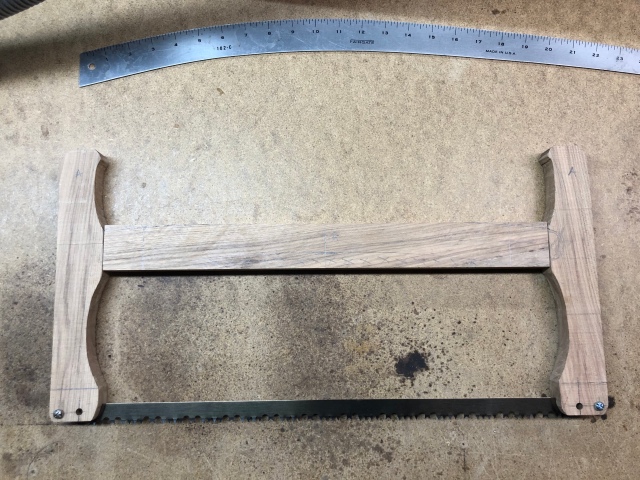 Finished without the cord:

My youngest has been hanging out in the shop with me and we’ve been talking about projects.

So I made her a small box. Maple milled to 1/4″ on the bandsaw, mitered and then keyed with walnut. Top is walnut with a carved finger pull.

I agonized over how to attach the pull. I didn’t want to use anything but wood, but was worried it would break off. So I predrilled and counter sunk 2 tiny screws. There’s a hairline crack on one side of the pull. I may take the screws out and in their place, epoxy a few bundled wooden toothpicks. Or just leave it and repair it if it breaks off.

But there is a spatula. I’ve been hanging out in the shop a lot this winter – making things that fit my fancy.

I cut it out of a block of maple in the scrap pile using the bandsaw. I really like the angle on the handle – feels good in the hand and it’s nicely balanced.

The thing with people who lack emotional intelligence is that just as they are oblivious to their own behavior, they fail to see when that same behavior is redirected back to them. It’s kind of a double blind. 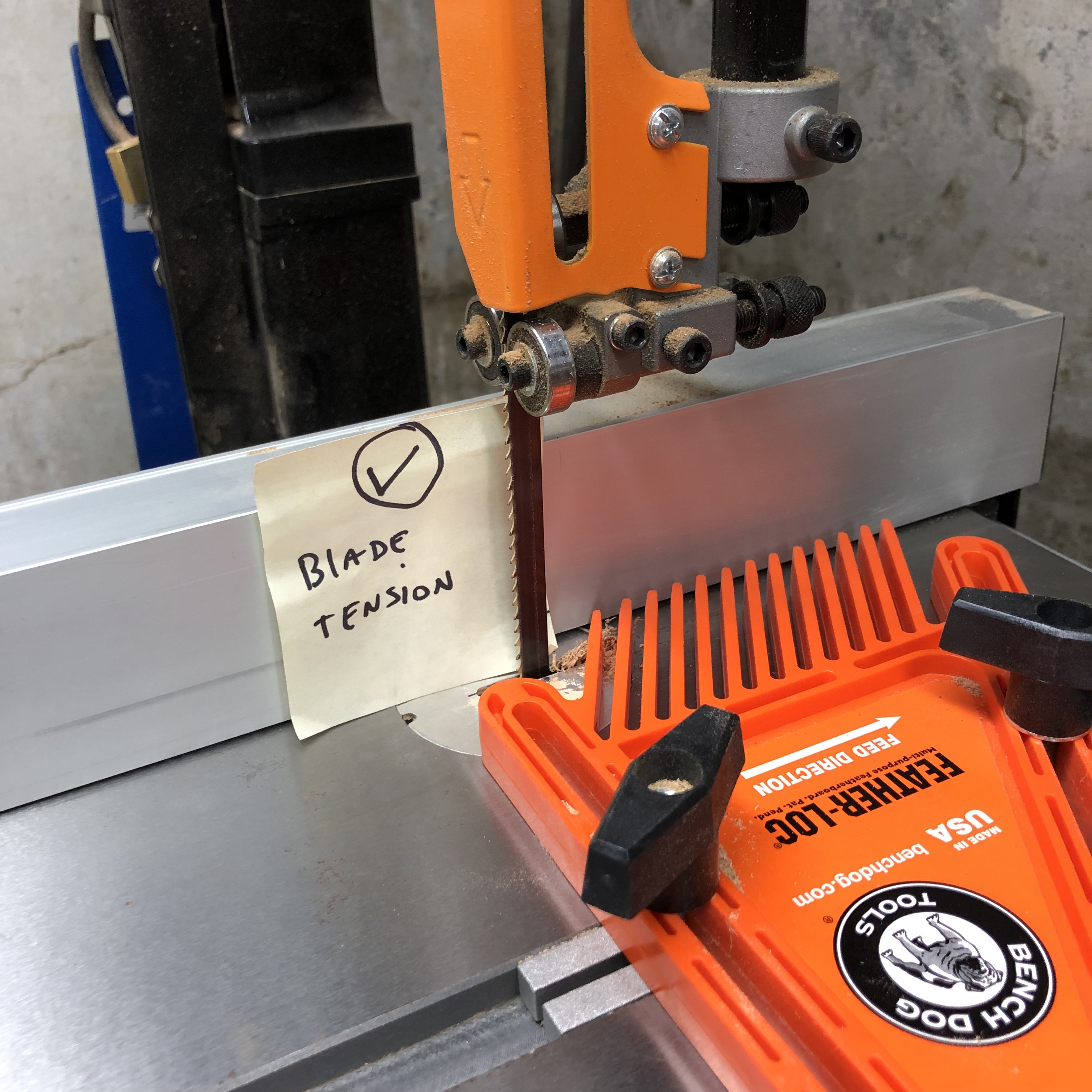 Just as a reminder to myself, I wear every single chain even when I’m in the house

I had this really nice piece of 1 inch thick Cherry today – I think it was left over from the kitchen pot rack … but I needed some thinner material for my current project.

I used the bandsaw the resaw to the thickness I needed – 1/2 less the thickness of the blade. I’m not sure if there’s a way to get the center exact when resawing, I was off by about 1/16th and was left with 2 pieces each of the same thickness, 4 total.

There were a few wobbles, but I know the blade is pretty close to the correct tension. I’m not sure if there’s a tool – a tensiometer – like you use to check spoke tension when building bicycle wheels. Maybe?

I don’t have a power planer, only a handful of #4 hand planers. Working in the shop with the material locked in between the bench dogs and the front vise, I planed everything to final thickness by hand.

I was climbing in the gym with a friend visiting from Colorado yesterday and I was telling him about my trip to Ouray and how beautiful Western Colorado is. I drove South through Lakewood and then West on 285 toward Fairplay and as I was driving at night by myself listening to The Firn Line, I remembered that I had been on this road before.

In 2001 I flew out from D.C. to race the Leadville 100 (mountain bike). Before ending up in Leadville, my girlfriend (at the time) and I stopped to ride the Colorado Trail from Kenosha Pass. It was a sunny August morning and I remember I was just wearing a cycling jersey and had some arm warmers and a shell stuffed in the pocket of my jersey. We rode for about 5 miles and were caught in the (2nd most) scariest summer Colorado storm I’ve been in*. It started to hail and freezing rain fell. I gave my girlfriend the shell and put on the arm warmers and we rode as fast as we could on singletrack back to the car at the pass.

By the time we got back my lips were blue and I was shivering with hypothermia. We cranked the heat in the car and just sat there trying to warm up. That’s when it happened.

A flat bed semi truck came up over the pass, slid across into oncoming traffic and took the top off a passenger car going West down the pass. I remember getting out of the car and running over to the car. Other cars started to pull off and traffic slowed to a stop. I walked over to the car not really thinking or knowing what to expect. There was a little girl curled up in the fetal position in the back seat – the driver and front passenger were both deceased. In what was probably only 15 seconds later more drivers came up to the scene and a man identified himself as a paramedic. That’s when I turned and walked away, realizing there wasn’t anything I could do. I got into the warm car and shortly afterwards continued the drive through Buena Vista and on to Leadville.

I recognized the landscape last week as I started driving up Kenosha Pass. A flood of history came back to me and I gripped the steering wheel tighter, just wanting to be over the pass and down the other side – on my way West.

*The scariest Colorado summer storm I’ve ever been in was trying to climb Handies Peak from American Basin. It’s the only time I’ve experienced Flash/Boom lightening. It’s terrifying.

Oh yeah. This episode of The Firn Line was excellent.

New episode! Literally some of the best skiing on the internet. I recommend starting at the beginning of season 1 and watching them through. So good. My fave is still EP#10 98 au patin (Chamonix cakes in your ears…)

She plays, I sing. We had an epic karaoke session at home on Christmas. My daughter wanted me to sing this one, but I couldn’t remember the tune. She just learned how to play Havana is now learning this song, Girls Like You by Maroon 5.